Huge congratulations to Peter, our Regulation & Staffing Manager, for completing his first ever Half Marathon! 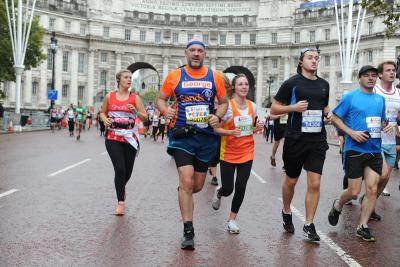 On Saturday 13th October 2019 Peter ran around the Royal Parks in London in aid of Sands, the Stillbirth and Neonatal Death Charity. A grueling 8 week training schedule, which started whilst Peter was managing our Day Camp, has paid off! With a newly trimmed waistline and haircut to match, he clocked an admirable time of 2 hours 2 minutes. He set quite a pace as he headed towards Westminster but the last 5km in Hyde Park were tough as his old rugby war wounds started playing up. But he did it and has raised over £1,300 to help support the wonderful work of Sands!

Peter’s amazing fundraising journey for Sands began 5 years ago after his son, George, was tragically stillborn on 14th October 2014. The support his family received from the charity, especially during those early bleak days of grief, was invaluable. Peter decided to continue to support Sands by attempting a challenge each year in memory of his son. He has walked 100km non-stop from London to Cambridge, run along the Grand Union Canal and grown a moustache, dying it pink in the process! Over the years, Peter estimates that he has raised in the region of £18,000 for Sands and he doesn’t intend to put his feet up for long. It is just a question of what to do next – suggestions are most welcome!

The tragic events 5 years ago have had a profound impact on Peter and his family. The pain of losing a child is indescribable and the journey to recovery is a long and complex one. After taking time away from teaching, we are so pleased to have Peter return to XUK Camps where it all began for him and his wife Georgina! They met as young twenty somethings working as leaders at XUK Activity and the rest they say is history!

Peter continued to return to XUK Activity in his summer holidays, eventually working side-by-side with Richard as an Assistant Manager. As Peter’s teaching career took off, we sadly saw less of him in the summer holidays with his various roles as a Classics teacher, Head of Department, Housemaster and rugby coach demanding more of his time.

Peter’s experience as a highly skilled teacher and devoted family man has been to XUK’s benefit. It has been wonderful working side-by-side with him once more and rolling back the years! He now oversees the important regulatory areas of the business and is responsible for the recruitment and training of all our staff. He brings a dedicated and hardworking approach to all he does, but most importantly has not lost that passion for seeing children thrive and develop in a caring environment.

Peter would be the first to admit that the loss of his son has changed him profoundly and shaped his perspective on what really matters in life. It’s a mantra of family first, trying not to take life too seriously (this is still a work in progress!) and doing a job you care passionately about.

Well done, Peter, everyone at XUK is so proud of what you have achieved.

If you wish to find out more about Peter’s fundraising and Sands, click the links below: